The market crashed, but mountains rose

“I was driving down country roads and I saw a beautiful sunset and mountains with snow. I thought: that looks like a stock chart.”

When the stock market crashed in March 2020, Gladys Estolas looked up her holdings on the Robinhood app and examined the charts. She saw a steep downward slope followed by wildly fluctuating peaks and dips.

Where most people saw personal loss, Estolas saw beauty: hills, skylines, trees, and lakes. The novice trader’s artistic mind crowded out the losses and she began to spin chaos into gold.

With pencil and digital renderings, Ford’s stock chart became a craggy mountain range at sunset; Amazon’s turned into green hills of Impressionist brushstrokes. Apple’s ups and downs morphed into an Oz-like countryside. The images led to a new company, Stoxart, which Estolas now refers to as her “side hustle”. 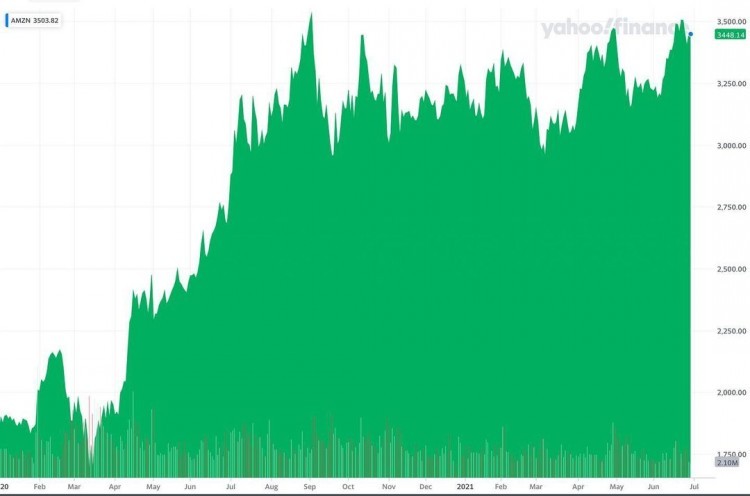 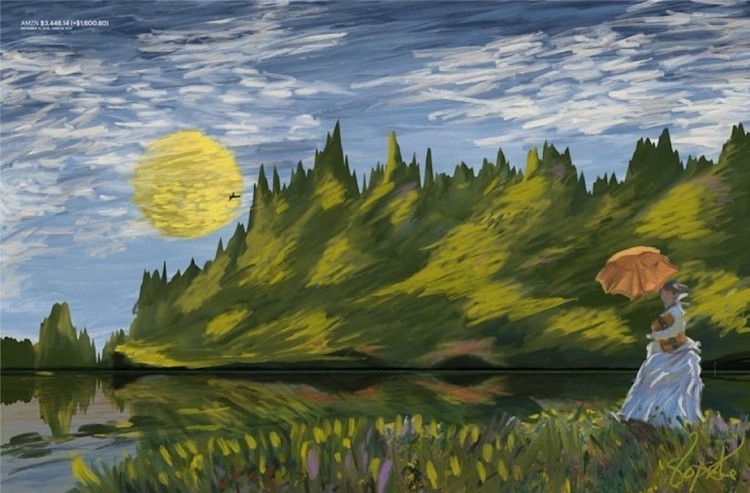 This is how Estolas’s brain works. A conceptual artist who sees faces in clouds, Estolas has a rare talent for turning data into visual storytelling. It’s what she does for a living at Nike in Portland, Oregon. She describes her work as the “middle language between science and art”. Estolas takes reams of complex research and restructures it into colourful renderings of a shoe or an athlete, info-packed visuals to engage people at all levels of the company.

Estolas’s chart art, in contrast, began as a doodle at home. In between work, making dinner, and taking care of her toddler, she had an artistic vision. She began drawing images on chart printouts because her husband, Eric, didn’t get it.

“My husband is very literal. I was trying to explain what I saw in the charts and he said, ‘I can’t see it,’” Estolas said. “So my first images were done to show him.”

As she always does when inspired, Estolas poured herself into the pursuit, rendering unique images by layering two different digital drawing programs. For fun, she posted her interpretation of Tesla’s 2020 stock chart on the Robinhood subreddit: “I said, ‘hey guys, what do you think of this?’”

The reaction was swift.

“That’s when I realized this could be a thing.” 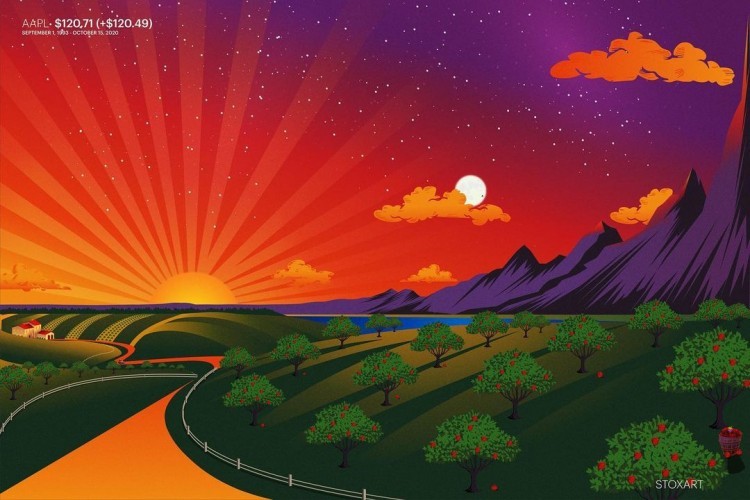 Estola's artwork based on a stock chart from Apple.

The charts-cum-art took off on Reddit, but Estolas was not yet thrilled with the images. She needed inspiration from the 3D world. Along with her husband and daughter, Estolas began driving into Oregon’s wilds to camp and hike. When she could get service, she perused stock charts on her phone for the latest movements. Mainly, she kept her mind clear and open. Then, in a moment she couldn’t have anticipated, she saw the Ford 2020 chart materialize in front of her eyes.

“I was driving down country roads and I saw a beautiful sunset and mountains with snow. I thought: that looks like a stock chart.”

The inspiration was confirmed as she examined the vista. Right across the road, several old Ford trucks mellowed in a farm field. She posted the mountains-at-dusk result on another subreddit called "Data Is Beautiful", a forum focused on art and design. The image streaked to the top of the page. With more than 600,000 thumbs up, it was one of the most popular posts ever on the forum.

Estolas likes to pause and note that the Covid-19 pandemic had just begun at this time. Americans were suddenly at home on lockdown, many feeling dismayed about financial losses, job insecurity, and the possibility of serious illness. Estolas realised she had something additional to offer via her chart art, something more than novelty and beauty:

“I wanted to catch that moment and make something positive,” Estolas said.

She continued to post as 2020 churned on, and her images began to blow up nationally. Fortune 500 companies, big trading firms — even the New York Stock Exchange — came calling. Estolas’s email overflowed with commission requests – and these companies were offering a lot more than the $55 Estolas was asking for prints on her Stoxart website.

More than one company rep was surprised by Estolas’s standard response.

She told them she’d consider commissions, but would only create images when she became inspired. In other words: you’ll have to wait until I see an image in your charts, she told the contacts at Big Tech and Big Finance companies. A good number of them stopped calling.

“I have been able to do many commissions — I really want to do them,” Estolas said. “But there’s a common misconception that this is my full-time job. I emphasise that this is a side project and that if they want something, they have to understand that I am probably not inspired yet. Art takes time and they want something now. They want to give me deadlines.” 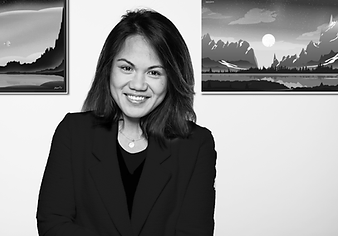 The artist poses with her work.

In between work and commissions, Estolas continued her “side hustle'' creating chart art available for viewing or purchase by the general public. Her rendering of Bitcoin’s chaotic ups and downs — represented by needle-y peaks and sharp crevasses — was inspired by Van Gogh’s Starry Night. Estolas created the piece in two hours. Once inspired, she runs home and works furiously until an image is near completion. 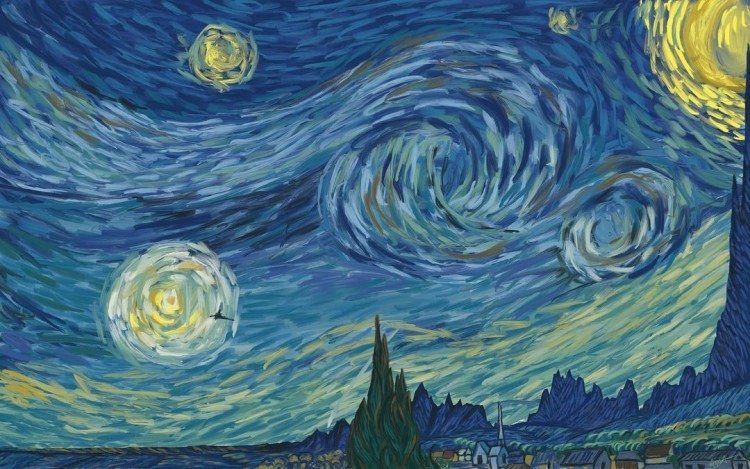 Estola's artwork based on a stock chart from Bitcoin.

If a company is patient, it will find itself with a custom-made piece of art plus a few Easter eggs. For Michigan-based Windfinder, she created a Great Lakes nautical scene with lighthouses. Each of those images was based on real lighthouses from the Wolverine State.

Estolas continually creates new images, some commissioned and some simply to sell as prints. Business is booming. So, how long will the project continue? Estolas isn’t sure. She refuses to use templates, creating all images from scratch, each entirely different from the next.

The answer is pretty simple when considering the artist: as long as she’s inspired.

Tamara Kerrill Field’s writing and commentary on the intersection of race, politics and socioeconomics has been featured in USNews & World Report, the Chicago Tribune, NPR, PBS NewsHour, and other outlets. She lives in Portland, ME.